The purpose of this post is to share the World Health Organization [WHO] official diagnosis coding guidance update for health care encounters and deaths related to the 2019 novel coronavirus (COVID-19) previously named 2019-nCoV. 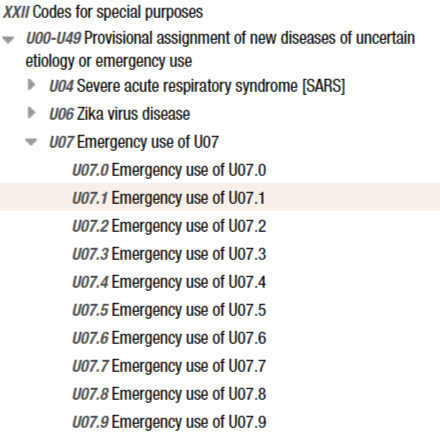 ICD-10 Chapter XXII: Codes for special purposes has a special sub-category called U07 Emergency use of U07. WHO’s recent creation of an emergency ICD-10 code U07.1, is assigned to the disease diagnosis of 2019-nCoV acute respiratory disease. See my screenshot image from ICD-10 to the left.

The title of U07 will be changed back to ‘codes for emergency use’.

It is to be noted that the name ‘2019-nCoV’ is temporary and is likely to change (to be independent of date and virus family, and for consistency with international virus taxonomy).

A new and final ICD-10-CM code title for the COVID-19 diagnosis code is now [March 17–18, 2020] been established, and will be implemented effective October 1, 2020, by the Centers for Disease Control and Prevention’s (CDC), USA and the National Center for Health Statistics (NCHS), USA.

From this Homepage, the reader discovers a top-level menu that brings you to various “places” within the ICD-11 Homepage. Below is a chart (you can view a larger image of this chart by clicking on this chart which will open in a new tab of this same open window) from my discovery of these various “places” and what I found from my exploration.  This chart shows the ICD-11 Menu Hierarchy as I had discovered and explored. In future posts, I shall write more on each individual menu item.

A Health Information Management (HIM) / Medical Records (MR) practitioner reader of this website-blog will surely be familiar and knowledgeable of The International Classification of Diseases (ICD) that covers death and disease, two main parameters of health and the health system.

I think it is appropriate for any HIM / MR practitioner to be aware of developments of WHO classifications such as the ICD.  In this post, I like to share in this post of what is already available at the WHO website about the 2013 Annual Meeting of the International Network of WHO-FIC Collaborating Centres (WHO-FIC 2013) which will be held at the Empark Grand Hotel, in Beijing, China, from 12 to 18 October 2013. This year’s theme is: “Universal Health Coverage: Information and Innovation”. The reader can view detailed information about the meeting venue, accommodation and registration available on the meeting website at this link (this link will open in a new tab of your current browser window).

Since participation to this meeting is by invitation only, I like to suggest – since HIM / MR practitioner readers will already be familiar with ICD-10 but need to be aware of the ICD-11 revision, to focus and follow the progress and developments in ICD-10 and ICD-11 to be presented when the WHO-FIC Council meets in Beijing soon to review progress in relation to the strategic work plan of the WHO-FIC network and plan for the future. Please click on these links below (each of these links will open in a new tab of your current browser window) to know and learn the progress and developments in ICD-10 and ICD-11 :

progress and developments in ICD-10

progress and developments in ICD-11

In this second part of the ICD 11 Content Model posts, I will aim to provide an insight into the basic structure of the model.

As you can read from the post ICD 11 – The Content Model, Part 1 (this link will open in a new tab of your current window), the revision process of the The 11th revision of the International Classification of Diseases and Related Health Problems (ICD ) is a broad participatory Webbased development process by the World Health Organisation (WHO).

This collaborative development of new content and proposed changes for ICD 11 is the responsibility of a Revision Steering Group (RSG) within the WHO ICD Revision Organisation Structure, which serves as the planning and steering authority in the update and the run-up to the revision process of ICD 11.

Today the Beta Draft of ICD 11 is available as the culmination of an information infrastructure and workflow processes started initially by Topic Advisory Groups (TAGs) for various specialty areas. The Webbased development of ICD 11 which is still open for comments and suggestions by interested parties in a social process on the Web, is integrated with knowledge of (i) diseases and health conditions, the eotiology and the anatomical and physiological aspects of the disease, (ii) input of all chapters and codes from existing clinical modifications of the ICD, and (iii) mappings to other terminologies and ontologies from other WHO-FIC (Family of International Classifications) members into computer systems, thus creating draft classifications for field testing as it is available in the Beta Draft of ICD 11.

I can prefigure the complex problems of developing ICD 11, which surely was undertaken and managed by using systematic approaches to deal with its development in a prescribed way and by using analytical techniques to identify and dissect the orderly arrangement of the mass of data already in a confused state into logical patterns thus promoting understanding and pointing the way to an appropriate decision within a clearly defined framework and a concrete context, the ICD 11 Content Model.

Thus, the Health Informatics and Modeling Topic Advisory Group (HIM-TAG) – also a part of the WHO ICD Revision Organisation Structure,  was entrusted to develop the ICD-11 Its task was to ensure that the Content Model remains the critical component of ICD 11 that specifies the structure and details of the information that should be maintained for each ICD category in the revision process.

The WHO (2013) describes the Content Model as a structured framework that captures the knowledge that underpins the definition of an ICD entity in the following ways:

Each category ICD 11 entity in the Content Model will be described by 13 different, defined dimensions or main “parameters” as can be seen below.

The Content Model of an ICD entity in the 11th revision of the International Classification of Diseases and Related Health Problems (ICD) forms the basis of this succeeding post to the earlier post ICD 10 & ICD 11 Development – How, What, Why & When (this link will open in a new tab of your current window).

It is not my intention to write volumes on Content Model, rather I shall attempt to share the basics of this model in its simplest form that I have understood as compared to ICD 10.

We know that ICD 10  had evolved to include morbidity classification from its original design to record causes of death. We are aware that ICD is also used for reimbursement (in countries like in the US), and also used in specialty areas such as oncology and primary care.

Then we also know that from the ICD-10 tabular list found in Volume 1, ICD 10 is organised as a monohierarchy. Monohierarchy is a top-down classification. Perhaps the following example of a monohierarchy among Felidae, the biological family of the cats will make things clearer of what I wish to write  about how ICD 10 codes are organised.

ICD 10 uses letters for an initial broad categorisation (e.g., I for diseases of the circulatory system) and combined with digits (e.g. I00 to I02) for each successive level of child codes. Sibling codes (e.g. I01.0 and I01.1) are considered to be exhaustive and mutually exclusive, requiring the use of residual categories—“unspecified” and “other”—at each level, (e.g. I01.9 Acute rheumatic heart disease, unspecified).

A code may have associated inclusions (I10 Essential (primary) hypertension Incl: High blood pressure) and exclusions (e.g. I01.0, Excl: when not specified as rheumatic [I130.-]).

Inclusions are exemplary terms or phrases that are synonymous with the title of the code or terms representing more specific conditions (e.g. I21 Acute myocardial infarction Incl.:myocardial infarction specified as acute or with a stated duration of 4 weeks (28 days) or less from onset).

As I have posted in the posts ICD 11 – history of the development of the ICD from 1853 to 2015 (this link will open in a new tab of your current window), ICD 11 is been developed as a participatory Web-based process.

This new ICD 11 information infrastructure captures the knowledge that underpins the definition of an ICD entity as we know of it today – again as I have elaborated above, which will thus aid the review of best scientific evidences to enable the definition of diseases and health conditions, encoding of the eotiology and the anatomical and physiological aspects of the disease, and mappings to other terminologies and ontologies.

Initially the workflow of the collaborative development of new content and proposed changes, review and approval processes, and the creation of draft classifications for field testing was undertaken by Topic Advisory Groups (TAGs) for various specialty areas.

The workflow continued with the Alpha Draft of ICD-11 revision process with comments and suggestions by interested parties collected in a social process on the Web and  ended by May 2010, and continued with the Beta Draft with field trials of draft standards.

The Alpha and Beta drafts have produced the new ICD 11 information infrastructure based on the Content Model for ICD 11 which represents ICD entities in a standard way, each ICD entity defined by “parameters” representing different dimensions – a parameter expressed using standard terminologies known as “value sets” that specifies the structure and details of the information that should be maintained for each ICD category in the revision process and which thus allows for computerisation.

Deployment of Health IT in China’s Fight Against the COVID-19 Epidemic
Information technologies have played a pivotal role in China’s response to the novel coronavirus COVID-19 outbreak, such as proactive surveillance for rapid detection and diagnosis of infection, immediate isolation, rigorous contact tracing, quarantine of the close contacts, and exceptionally high awareness and acceptance of the measures among general public.
Read more

HIMSS Health IT Conference Cancelled Due to Coronavirus
Numerous anchor companies began cancelling this week and hospitals not allowing many employees to travel.Read more

A universal DNR policy for COVID-19 patients
Some hospitals in the US are considering do-not-resuscitate orders for all COVID-19 patients, citing the high exposure risk for staff as protective equipment supplies run low, The Washington Post reports.Read more